The following runs are from the Electra Palace or Ialyssos Bay Hotels in Ialyssos.

First I tried running on the beach in the morning.
This was very hard work because the surface was difficult (sand and pebbles) and direct sun made it very hot.

A better route was to head South, away from the sea, to Filerimos Mountain for an evening run.
This route was mostly shaded and there are two options shown below, both about 7-8 miles.
Go up to the main road near the Bank of Cyprus.  Turn right, run along the main road, then after about one mile go left (South) just past the
Winnie The Pooh sign.
Follow the path up into the forest. If you just follow the path (RED ROUTE BELOW) it takes you down and past a cemetery.
Carry on to the main road, then head right (west) and follow the main road up
on a zig zagy route. Eventually you reach the top of Filerimos Mountain.
In my red trace below I stopped before reaching the top as I didn't know the road was going to the cross.
So the red route shown is only partial.  The cross is so big that you can go up inside it and
the arms make a viewing platform.  If part way through the forest you took the right turn,
missing out the cemetery (BLUE ROUTE), it takes you up and back down, eventually passing a tank and to the beach. 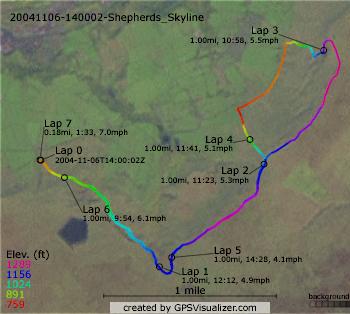 The Winnie The Pooh sign (turn left after this)

The cross on top of Filerimos Mountain, with arms as viewing platfoms