This race starts on the other side of the hill from February's Winter Hill fell race.  Registration is at the Belmont Bull, and from there you pass through the local fete to a field where the races end.  The fete gives the event a very pleasant village atmosphere.  The locals put their garden furniture, parasols and tables out front and sell everything from cakes and soft drinks to second-hand books to raise money for charity.

The course starts on the road, then veers left up a small hill, along, then up Winter Hill.  You have a flatish section (watch out for hidden holes!), down and, along and back up winter Hill for an unwelcome second time.  From there you retrace your steps, have a steep descent, then instead of travelling back along the road you go through an area of wooden foot bridges,  Its fastest to actually miss the bridges, which can be slippery and dangerous, and stream jump instead.  Fell shoes worked well, trail shoes would have been OK.

Its a steep one but as its a relatively short race this would suit all abilities. 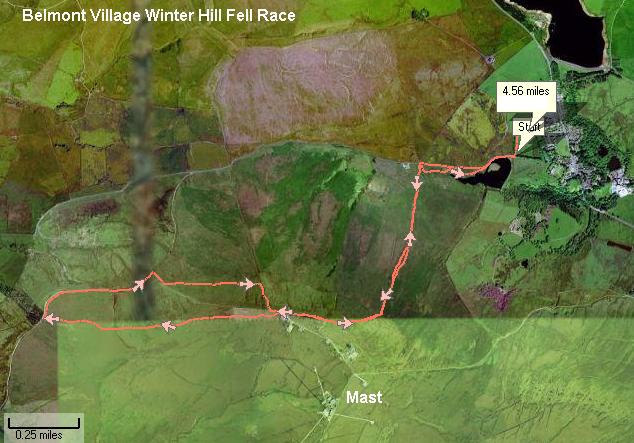